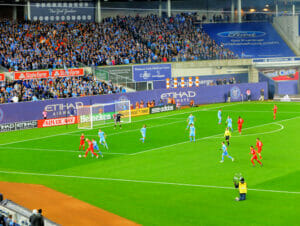 Tickets for this season are not available yet
Would you like to receive an email as soon as the tickets are available? Send me a message at [email protected] and I’ll email you on the day the tickets go on sale.

Ticket prices vary from 30 to 300 dollars. Seats behind the goals are often cheaper, but keep in mind you have lesser views of the field. Choose the date that when you wish to see a soccer game or view the table below. Tickets for New York City FC can be paid for by credit card. You will receive mobile tickets. The mobile tickets can’t and don’t need to be printed out. Your tickets are 100% guaranteed authentic and will be available on time.

Season ticket holders who cannot make the game provide the tickets to the site. Therefore they are available at discounted prices. If the official tickets are sold out, these tickets consequently increase in price and can be more expensive than the originals. If New York City FC doesn’t play on the date that you are in New York you can check if the Red Bulls do. 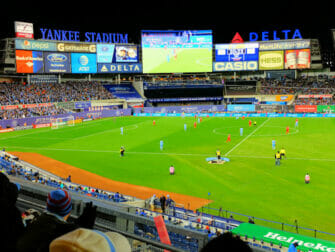 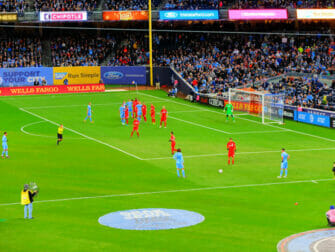 Where should I sit at a New York City FC Game?

At Yankee Stadium, if you like to sit in the most enthusiastic part of the crowd, search for tickets in the supporter’s section (235 to 238). When you prefer a more calm area or when you’re visiting the game with kids I would advise you to buy tickets for another section. Tickets in the 100-series for the stadium’s long side are a good option. As Yankee Stadium is built for baseball, during a soccer game some seats are further away from the field than others. The view of the field however is good from every seat on the long side. 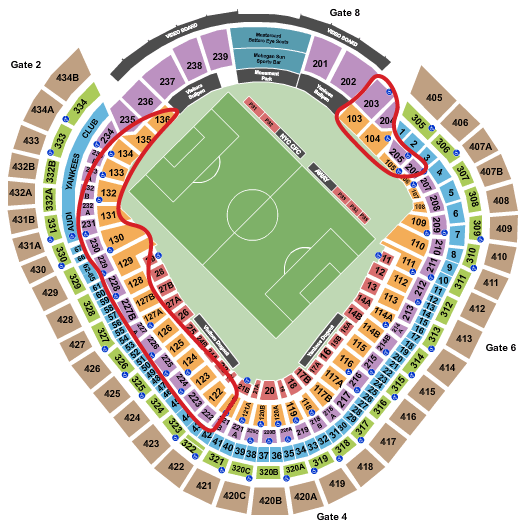 The Yankee Stadium is best reached by subway. The stadium is located opposite metro station ‘161 Street’. Line 4 takes you directly to the Yankee stadium. You can also take lines B or D, but they don’t always stop at this point at certain times. Still, choosing one of these lines? Ask a New Yorker if it will be stopping at ‘161 Street’. All lines run all the way through Manhattan and you can hop on at any point.

I recommend that you arrive at least 30 – 60 minutes before the match. This way you’ll have plenty of time to find your seat and to watch the pre-match activities. If you arrive early you will also have some time to explore the stadium. For a great view of the field check out the Yankee Memorial below the video board, called Monument Park. You can visit Monument Park for free, it remains accessible until 45 minutes prior to the scheduled start time of the match.

How to get back to Manhattan

Subway is the best option for getting back to Manhattan, after the game. Leave a little earlier if you’re worried about crowds.

Please note: some of the games are played at other stadiums. Some matches are played at the Citi Field Stadium, which is easy to reach by subway line 7, and others in New Jersey. You can go there by taking the PATH. You can see the location of the game when buying your ticket.