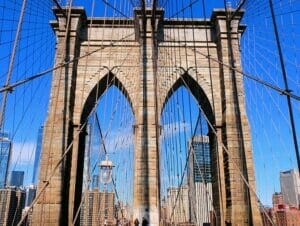 The Brooklyn Bridge was built between 1869 and 1883 and was opened in May 1883. It was the first bridge in the world to be suspended by steel. For a while, the Brooklyn Bridge was the only connection between Manhattan and Brooklyn. If you walk over the bridge from Brooklyn to Manhattan, you’ll have a wonderful view of the skyline of New York.

History of the Brooklyn Bridge

When the Brooklyn Bridge was built it cost US$19 million. In 2007 this amount was equivalent to US$320 million. Funny fact: Six days after the opening rumours arose about the stability of the bridge, it was said that it would collapse. To prove the contrary circus man P.T. Barnum paraded 21 elephants over the bridge a year later.

The Brooklyn Bridge has evolved over the years to become both an attraction and a symbol of New York. The best way to see the Brooklyn Bridge is on foot. It is best to walk across the Brooklyn Bridge to Manhattan so you can enjoy the view of the New York skyline. An advantage of this is also that the bridge is slightly sloped in this direction. This takes approximately 45 minutes but allows for more time as you will want to take photos.

Take metro line A or C to High St. in Brooklyn. From here you can follow the signs for “Brooklyn Bridge”. The entrance to the bridge is on Washington Street.

Another great way to explore the Bridge is by renting a bike and cycling over it. If you’d rather go on a guided tour and learn about the history of the Brooklyn Bridge while you cross the bridge, read more here. 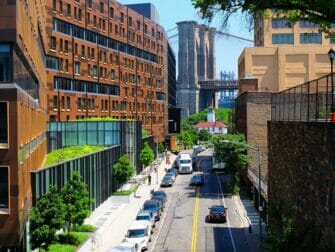 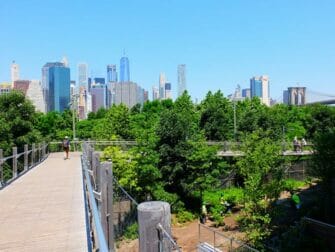 What to do in Brooklyn

The name ‘Brooklyn’ comes from the Dutch town Breukelen. Brooklyn is one of the most relaxing areas in New York. It is also one of the most multicultural areas of the city. Every culture has its own little neighbourhood in Brooklyn.

In Brooklyn, you can enjoy coffee and sandwich at the Empire Stores next to the bridge. Enjoy the view of the Brooklyn Bridge and the Manhattan skyline at this urban marketplace in DUMBO. They open early, so it’s a great place to start the day.

Are you really hungry or simply want to eat good pizza? Go to Juliana’s on 19 Old Fulton Street. If you only want a drink, you’ll find many bars in Brooklyn. 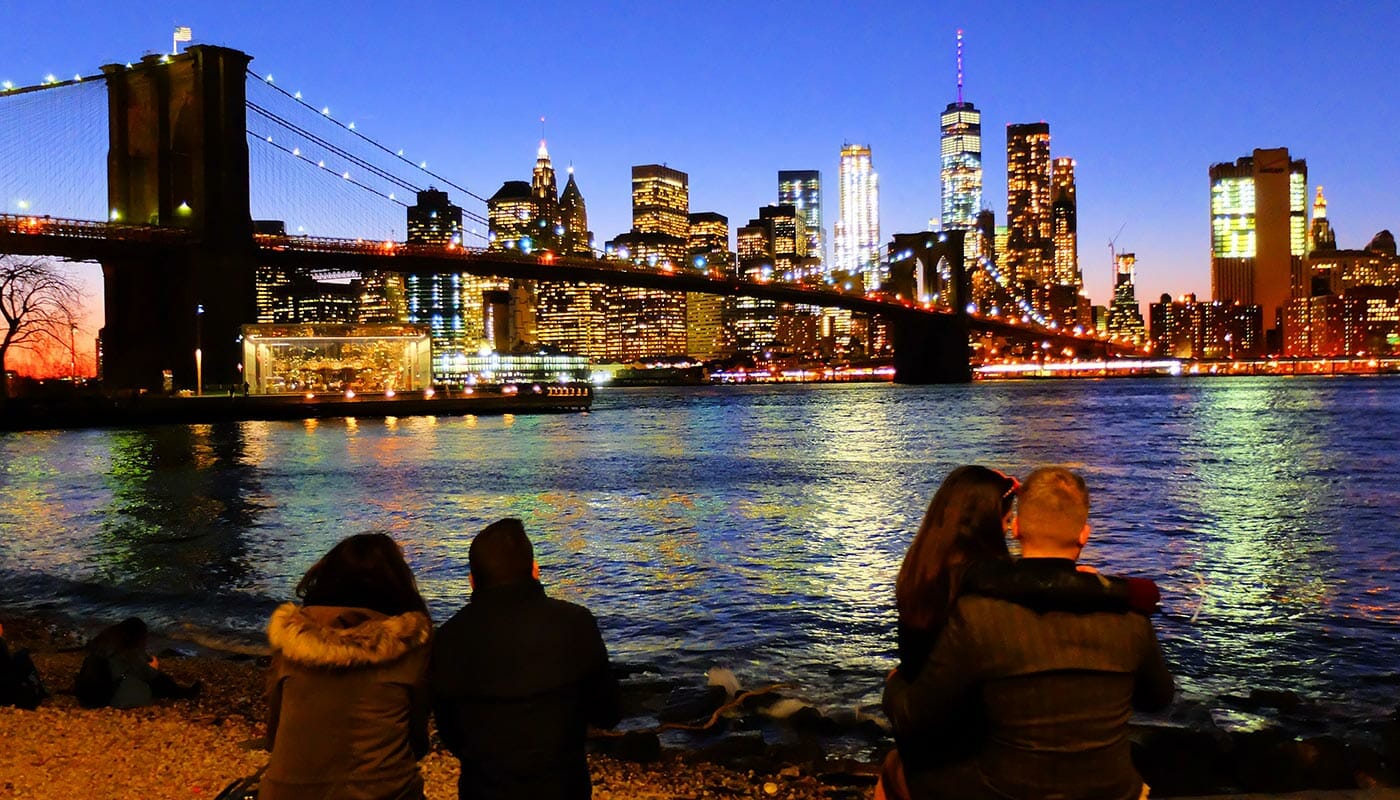 Eric’s tip: If you don’t want to do too much walking, choose to take the NYC Ferry over the water. It only takes a couple of minutes to get from Manhattan to Pier 1 in Brooklyn Bridge Park. On the way, you have a great view of the skyline and the Brooklyn Bridge. 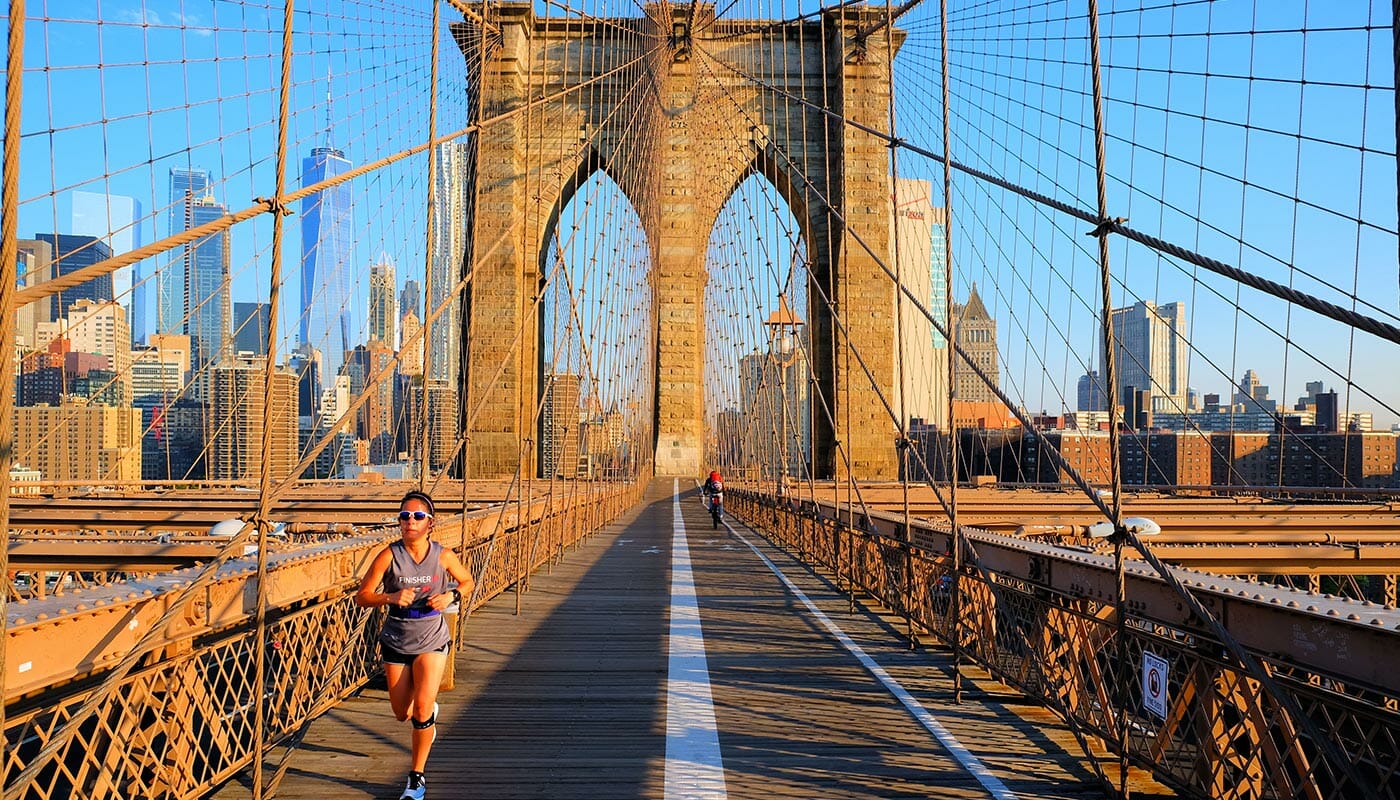