MLS Soccer in New York is becoming increasingly popular, and watching a match is a fun experience for locals and visitors alike. The Division 1 professional soccer league in the U.S. and Canada is called MLS, which stands for Major League Soccer. New York is home to the two MLS teams New York City FC and New York Red Bulls. The season runs from early March until late October. Below you can find the overview of all MLS soccer games in New York.

There are two soccer teams in New York:

In New York, the two teams playing in MLS, the most famous soccer league, are the New York City Football Club (or New York City FC for short) and New York Red Bulls. The Red Bulls don’t play in New York, but at the Red Bull Arena in Newark, New Jersey. New York City FC, on the other hand, doesn’t have a stadium of its own but currently uses Yankee Stadium in the Bronx. For every game, the baseball field is changed into a soccer field, which makes it very unique to visit New York City FC in this stadium.

After New York City FC was formed in 2013, a rivalry between the two teams started. They first played against each other in 2015 and since then this derby was given the name Hudson River Derby. The first few years the Red Bulls were the stronger team, but soon after New York City FC started catching up. Attending a soccer game in New York is quite affordable. New York Red Bulls tickets start around $ 35.

Eric’s Tip: Yankee Stadium, where New York City FC plays, can easily be reached by subway from New York. The Red Bull Arena is in the neighbouring state, New Jersey, and can be reached with the PATH train. 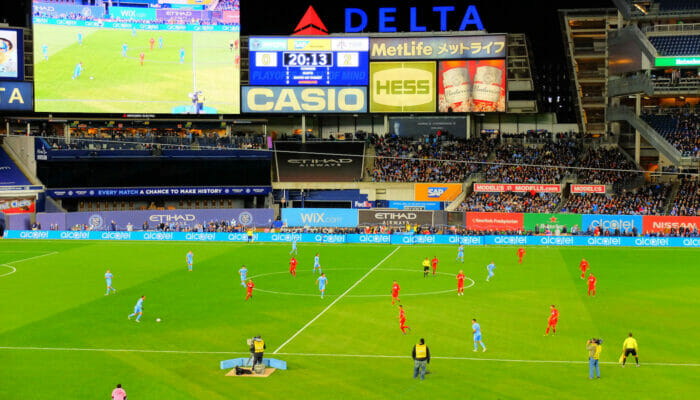 Football, or soccer as it’s known in the United States, might not be the first sport that springs to mind when you’re thinking of New York. However, it’s becoming increasingly popular here. The fans are very enthusiastic, and even New York City FC has a loyal following, despite only having been founded in 2013. There’s a great atmosphere at the soccer stadiums in New York, making watching a match a fun experience for people of all ages.

In the MLS regular season, which runs from late March until mid-October, each team plays 34 games. The team earning the most points in the regular season gets awarded the Supporters’ Shield, an honour won several times by the New York Red Bulls. The best teams of the season qualify for the MLS Cup Playoffs and play additional matches in late October and November, culminating in the championship game, the MLS Cup. As of yet, neither the NY Red Bulls nor New York City FC have won the MLS Cup.

How many MLS soccer teams are in New York?

Yankee Stadium is currently home to NYC FC. For every game, the baseball field is changed into a soccer field.

Where do the New York Red Bulls play?

The New York Red Bulls play in their own stadium: Red Bull Arena. This stadium is not in New York but in New Jersey.

How much are soccer tickets in New York?

It depends on which team you want to visit. You can read more about MLS tickets in New York here.