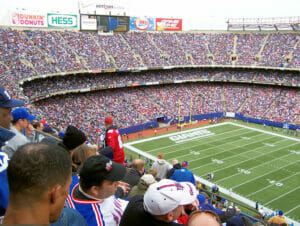 Buying New York Giants tickets online before your trip is a good idea. Giants games are very popular and always sold out. Seeing a game of American football is a great experience and definitely worth doing when in New York. New York Giants play at the MetLife Stadium in New Jersey, just 30 minutes away from Midtown Manhattan. American football season runs from September to January.

Every game of the New York Giants is sold out. The waiting list for a season ticket is 15 years long! “Cheap” tickets start around US$100 to $130 apiece. You can search here for a date when you’d wish to see New York Giants play or view the table below. The tickets can be paid by credit card and are sent to your address or email. Your tickets are 100% guaranteed authentic and delivered on time.

If you can’t get tickets to New York Giants, check if the New York Jets are playing a home game. 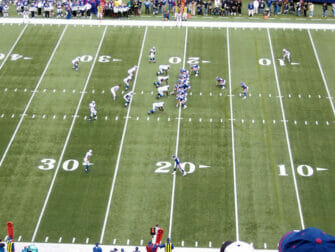 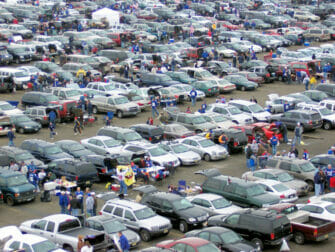 Where Should I sit at an American football game at MetLife Stadium?

There is one rule: If you have tickets, then you are already lucky. The MetLife Stadium is big, but you still feel that you are close to the field. In the picture below, I have marked the areas in red that are the best places to sit. If those seats are too expensive, then please try for seats higher up, because the most important is to get tickets to a game. 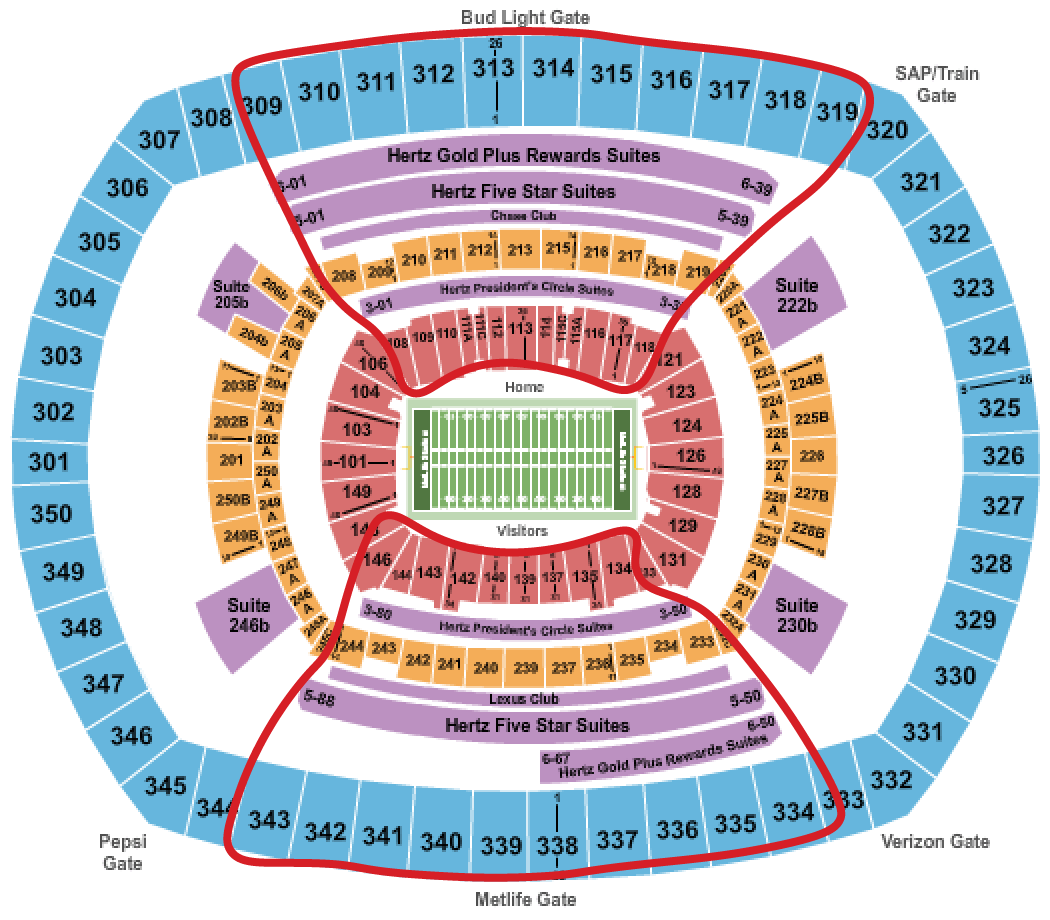 How to get to the MetLife Stadium?

It is easy to travel to The MetLife stadium by public transportation from Manhattan. Don’t worry about finding the stadium, because thousands of fans will be travelling with you to the same destination. These are the two best options for getting there:

1) Take the train from Penn Station on 34th Street and 7th Avenue in Manhattan. Buy a ticket at either the counter or at the machine for the MetLife Stadium. You need to take the NJ Transit rail to Secaucus, New Jersey (the trip takes about 10 minutes). Here, you will transfer to a train that takes you to the stadium. This train will also take about 10 minutes. You don’t have to worry about not finding the trains, because you can just follow the crowds of fans travelling with you. Trains begin running 3 hours before kickoff and run until 2 hours after the game ends. The total cost is US$11 for a round-trip.

2) Take the Coach USA Express bus from the Port Authority Bus Terminal in Manhattan on 42nd Street and 9th Avenue. These buses begin running 2.5 hours before kickoff and run until one hour after the game ends. The cost is US$14 per person for a round-trip ticket. Note that returning home from the game can be very busy on the buses, but everyone ultimately gets a ride back to the city after the game.

When Should I Arrive at the Game?

If you arrive 1-1.5 hours early you will have enough time to see around and soak up the atmosphere. See also Eric’s Tip.

How to get back to Manhattan

To return to Manhattan after the game use either bus or train, depending on whether you’ve purchased a round-trip ticket. I prefer to travel by train to MetLife Stadium but the bus is a good option too.

Eric’s tip: Going to the MetLife Stadium is a really great experience! Everything is very well organized and new. If you have the chance to go, then do it! It is awesome. Feel free to bring along a small camera but bags, backpacks, food, drinks and umbrellas are not permitted. Arrive on time, because everyone will already be there barbecuing in the parking lot, this is called tailgating and it’s a very bizarre sight. Also do take time to walk through the entire stadium.

See below for a list of dates and book directly