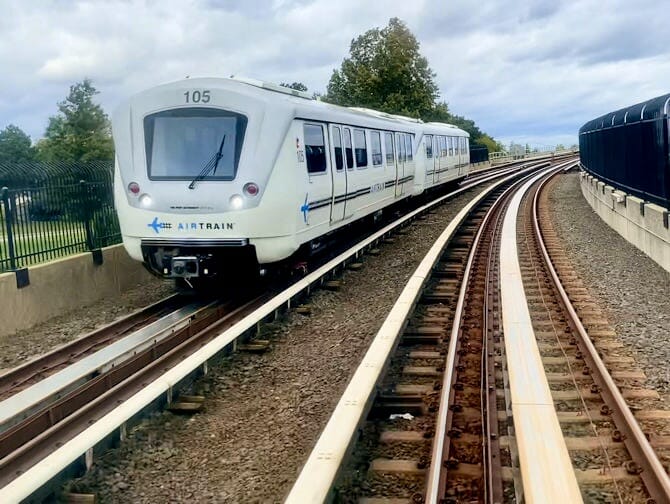 The JFK AirTrain in New York is a fast way to travel from JFK International Airport to Manhattan. The JFK AirTrain is an unmanned train that shuttles between the different terminals of JFK Airport and connects it to two metro stations nearby. At these subway stations, you can then transfer to one of the subway lines heading for Manhattan, Brooklyn or Queens for a fast transfer from the airport to your New York hotel.

How does the JFK AirTrain work?

You can take the AirTrain to travel from JFK to Manhattan, among other routes. In the terminal where you arrive, follow the green signs marked “AirTrain”. You will then arrive at the AirTrain boarding point in the terminal. This is where the three different AirTrain lines depart, arriving in turn. On the digital board, you can see how long it will take for the next train to arrive. See if you need the Jamaica, Howard Beach or All Terminals line (learn more about these routes below) and hop on. You do not need a ticket to board yet, as the use of the AirTrain within the airport itself is free. If you have chosen the Jamaica or Howard Beach train, the train will leave the airport after it has stopped at the other terminals. Since taking the AirTrain to these metro stations is paid, you will need a ticket when getting off at the end station. You must swipe it here in order to leave the AirTrain section of the station and transfer to the metro.

If you only use the JFK AirTrain within the airport, to get from one terminal to another, it is free to use. If you would like to use the AirTrain to travel from JFK to Manhattan or vice versa, you must have a JFK AirTrain ticket. You can buy these at the end stations, but the lines at these machines are often very long. Therefore, I recommend that you order the tickets online before leaving for New York. A single AirTrain ticket costs $8 plus $1 for the physical card. This card is rechargeable. You can therefore choose to use the same card for your way back, and top it up with a credit of $8 instead of buying two separate tickets.

The total route of the JFK AirTrain covers no less than 13 kilometres. First, the train travels around the airport, where it connects the various terminals. There are two trains that connect the airport to the city; the Howard Beach Route and the Jamaica Station Route, both named after the subway station served by the AirTrain. There is also an “All Terminals Loop”, which only runs between the different terminals and does not leave the airport. 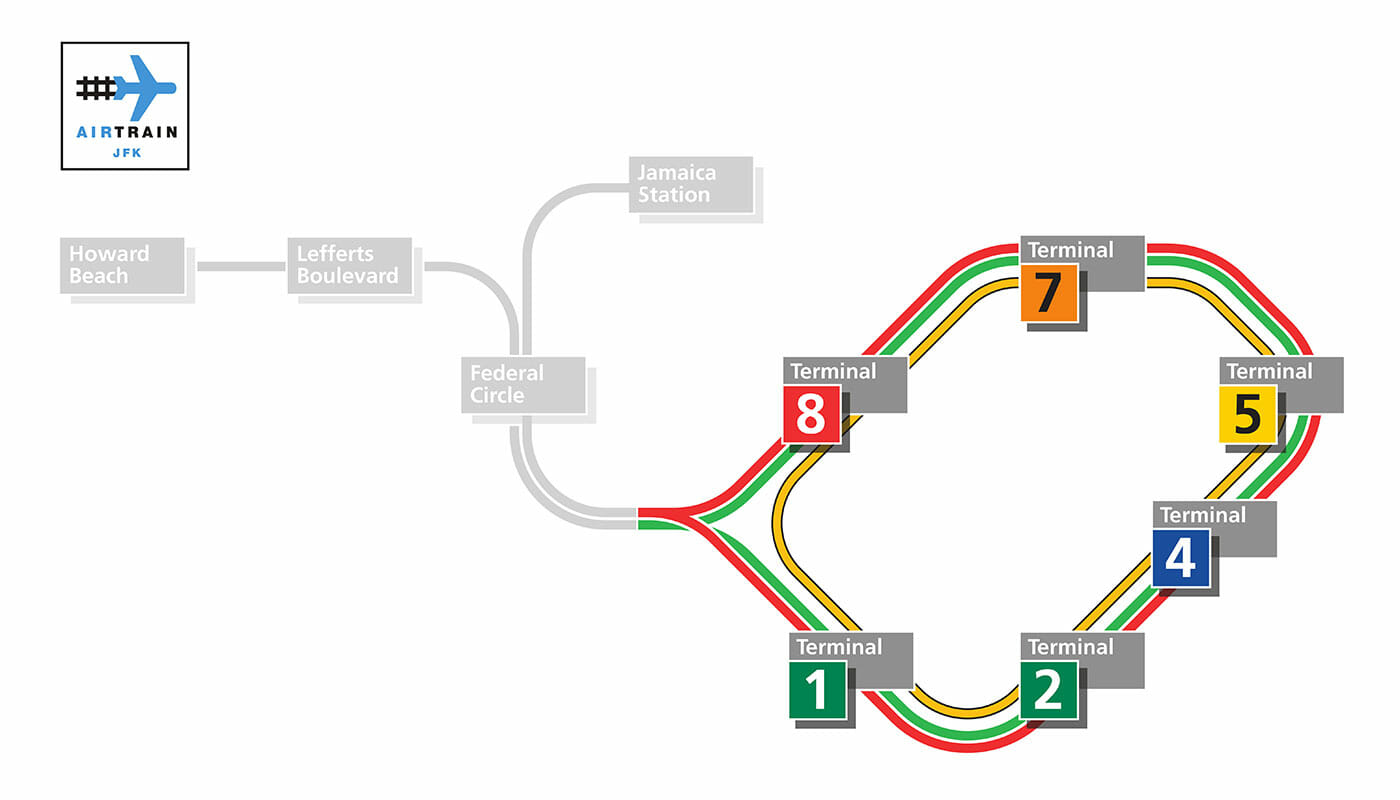 The Howard Beach Route first stops at Federal Circle AirTrain station after leaving the airport, where the car rental companies can be found. The next stop is Lefferts Boulevard at the JFK parking, followed by the final stop Howard Beach Station. From here you can change to the blue subway line A which runs via Lower Manhattan to Fulton Street, Penn Station and Times Square. When you leave the AirTrain, you will come across a ticket machine just before the check-out gates. If you do not have an AirTrain ticket yet, you can still purchase it here.

The Jamaica Station Route also stops first at Federal Circle. This train then continues in one go to the Jamaica Station metro station. Here you can transfer to several subway lines, namely the E-train, which goes via Long Island City via Midtown Manhattan to World Trade Center, and the J and Z lines which go towards Lower Manhattan. You can also take the Long Island Rail Road (LIRR) here, the train that travels east to Long Island and west to Penn Station or Grand Central. Just like on Howard Beach, Jamaica station has a ticket machine before you need to check out, so you can buy an AirTrain ticket at the last minute if needed.

Eric’s tip: The Howard Beach line is quieter than the AirTrain to Jamaica. And while both lines are fine to take, this makes Howard Beach my personal favourite when I go to Manhattan. Howard Beach Station is also close to the sea, so the sea air is literally in the air, and the train runs above ground which gives you nice views. At Jamaica station, the walking distance between the AirTrain and the metro is also a bit further. On the other hand, there is more traffic in Jamaica, and therefore there are more lines to transfer to.

Is the JFK AirTrain free?

Taking the AirTrain and subway is the cheapest way to travel from JFK to Manhattan. The total trip costs $10.75 + $1. If you only use the AirTrain to get to another terminal within the airport, it is free.

Where can you buy JFK AirTrain tickets?

JFK AirTrain tickets can be purchased from vending machines at Howard Beach and Jamaica subway stations.

Can the physical JFK AirTrain ticket be charged?

Can I use the Unlimited MetroCard for the JFK AirTrain?

Can I use the Pay-Per-Ride MetroCard for the JFK AirTrain?

Yes, with a Pay-Per-Ride MetroCard you can also take the AirTrain. Make sure there is sufficient balance, the use of the AirTrain costs $8.