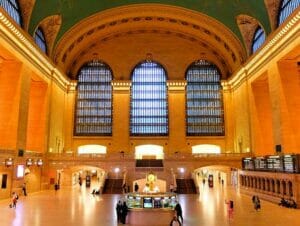 Grand Central Terminal opened on the 2nd of February, 1913, with its very first train leaving at 12:20. Many people still call it Grand Central Station; the name of the former railway station that occupied the same spot. Others refer to it as Grand Central, which is, the name of the subway station on 42nd Street. To get there you can take one of the Hop on Hop off buses that stop close by.

Grand Central Terminal is the world’s largest train station and certainly worth a visit. It consists of an impressive 44 platforms and 67 tracks, from where Metro-North Railroad trains leave, in addition to a number of restaurants. Beneath Grand Central, you can find the Grand Central Madison, from where the Long Island Rail Road runs. Most people though, come to see the Main Concourse in all its grandeur and it is splendid! When the current building was erected, the surrounding streets were provided with electricity. This made the area one of the most desirable districts for commercial offices.

However, perhaps the most notable icon of Grand Central is the four-faced clock atop the information booth. With each face made of opal, the grand clock is estimated to be worth between 10 and 20 million dollars. Each day over 750,000 people travel through the station of which 93% of those commuting are college graduates. With that many people making use of the station, it is surprising to see it in such pristine condition today. This wasn’t always the case, as extensive interior and exterior renovations have helped restore the building. And also the area surrounding the station is constantly changing. One of the newest additions is skyscraper One Vanderbilt, which is home to Summit Observation Deck.

If you want to know all the ins and outs of this beautiful station, you should definitely book a tour. The Grand Central walking tour, led by trained guides, will bring you to all the special spots. You’ll pass by the East Staircase, the Sky Ceiling and the famous clock in the heart of the central hall.

For a long time now, Grand Central is not only known for being a transportation hub. These days, there is a diverse range of shops, restaurants and even a food market within the terminal. For your Apple products, you can head to the Apple Store that looks out over the Main Concourse. To get to the store, take the stairs to the East Balcony.

On the ground floor, there’s Grand Central Market. A Market offering locally produced goods, such as fruit, coffee and bread. Another place for a quick bite is the Lower Level Dining Concourse, where you’ll find many eateries with a great choice of food.

Eric’s Tip: Grand Central is a majestic building with loads of interesting areas. Did you know that there’s even a tennis court inside? I often go to the station early in the morning or at the beginning of the afternoon, so I can go straight for breakfast or lunch. 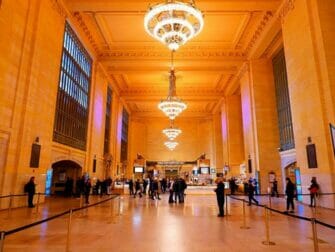 Surprises in the Station

When visiting Grand Central, be sure to look up at the ceiling. After 12 years of restorations, a beautiful decorated astronomical ceiling was revealed to the public – something which was completely hidden beforehand by tar and nicotine from tobacco smoke. A little patch above the Cipriani has been left to remind visitors of the grime that once covered the ceiling. The painting itself, however, has two rather large errors: the sky is backwards and the stars themselves a little displaced. To account for this, some have argued that the sky is backwards because this is how God would have viewed it from above. The stars themselves are slightly misplaced due to the design being based on a mediaeval manuscript. Be sure to tell this fact to your children when visiting Grand Central, it’ll surely impress them.

Another thing that will impress the kids, or flatter that special someone, is to have fun at the Whispering Gallery. On the dining concourse, near the Oyster Bar, the ceramic arches make a whisper sound like you are shouting across the room to each other. You will need two people to do this, each standing at opposite ends of the arch, face the corner and whisper. You’ll be surprised by what you hear!

Finally, you can impress your companions with facts about the building itself: Did you know, for example, that there is a secret platform (track 61) leading directly to the Waldorf Astoria, that President Franklin D. Roosevelt once used to avoid pesky journalists? 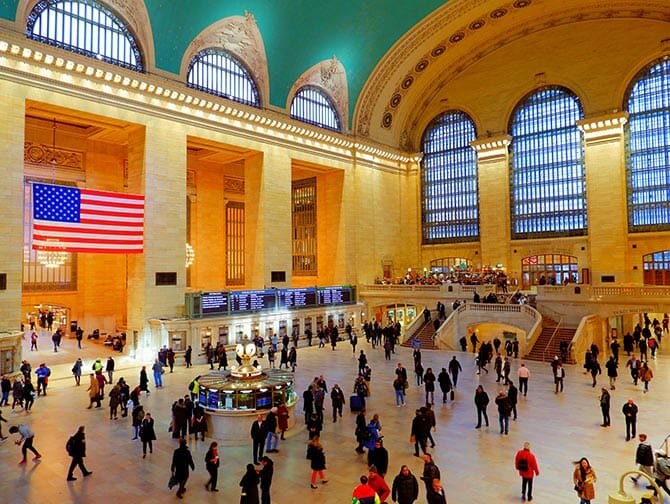 Why is Grand Central Terminal famous?

Grand Central Terminal is famous for being the largest train station in the world and for its beautiful interior. Read all about the New York station here.

What is at Grand Central Station?

Grand Central Terminal is both a busy transport hub and a popular tourist attraction. It’s famous for its opal clock, celestial ceiling, Whispering Gallery and more! See what you shouldn’t miss at Grand Central here.

Is Grand Central worth visiting?

Yes! Grand Central is an impressive station with many interesting sights, shops and eateries, so it's no wonder it’s a popular tourist spot.