There are many top New York Museums, which ones to pick when visiting the city? With over 200 museums in New York, not to mention the countless New York art galleries it can be hard to pick. I’m not a massive museum lover, but from time to time (when it’s raining or very hot) I can be found inside looking at Roman sculptures or learning about fossils. It’s, of course, a personal preference, but I’ve made a list of the best museums in New York. I’ll also give you tips on how to save time and money by visiting the various NYC museums.

My list of top New York museums contains a bit of everything; art museums as well as (natural) history museums. I’ve also included a bonus museum that’s really unique to New York as well as tips on what to do in New York when it’s raining or too hot outside. If you are just looking for a list of fun museums in NYC then scroll to the very bottom.

The 9/11 Museum in New York (officially called The National September 11 Memorial & Museum but also known as Ground Zero Museum) is my number one pick because it commemorates the victims of the attacks on September 11, 2001, and 1993. I think it’s a museum that everyone needs to visit alongside the 9/11 Memorial to pay tribute. The 9/11 Museum educates about the attacks but also allows room for visitors who do not directly want to be confronted with graphic images or artifacts. 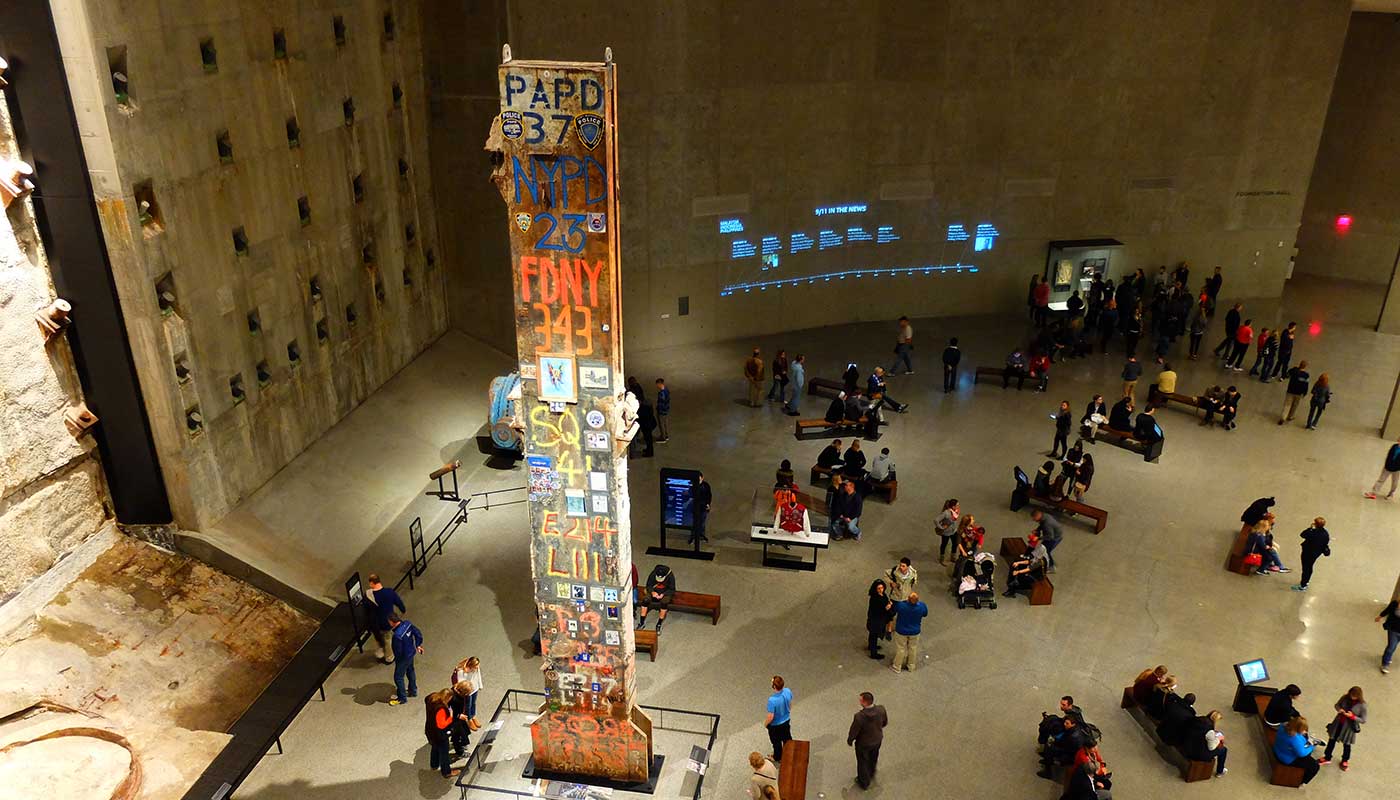 The Met (officially called The Metropolitan Museum of Art) is a large museum comparable to the British Museum. I can easily get lost visiting the Egyptian Art and I’m a big fan of the arms and armour on display. What I like most about the Met Museum is that there is a lot of variety, you will have no trouble finding something for everyone – or maybe you will as there is too much to see. Plan your visit to save time. The great thing about Met tickets is that it also allows you to visit the two other Met museums: The Cloisters and Met Breuer. While the Met Breuer is a 10-minute walk from the famous Met steps, the Cloisters are further away and I would only recommend visiting in the spring/summer. 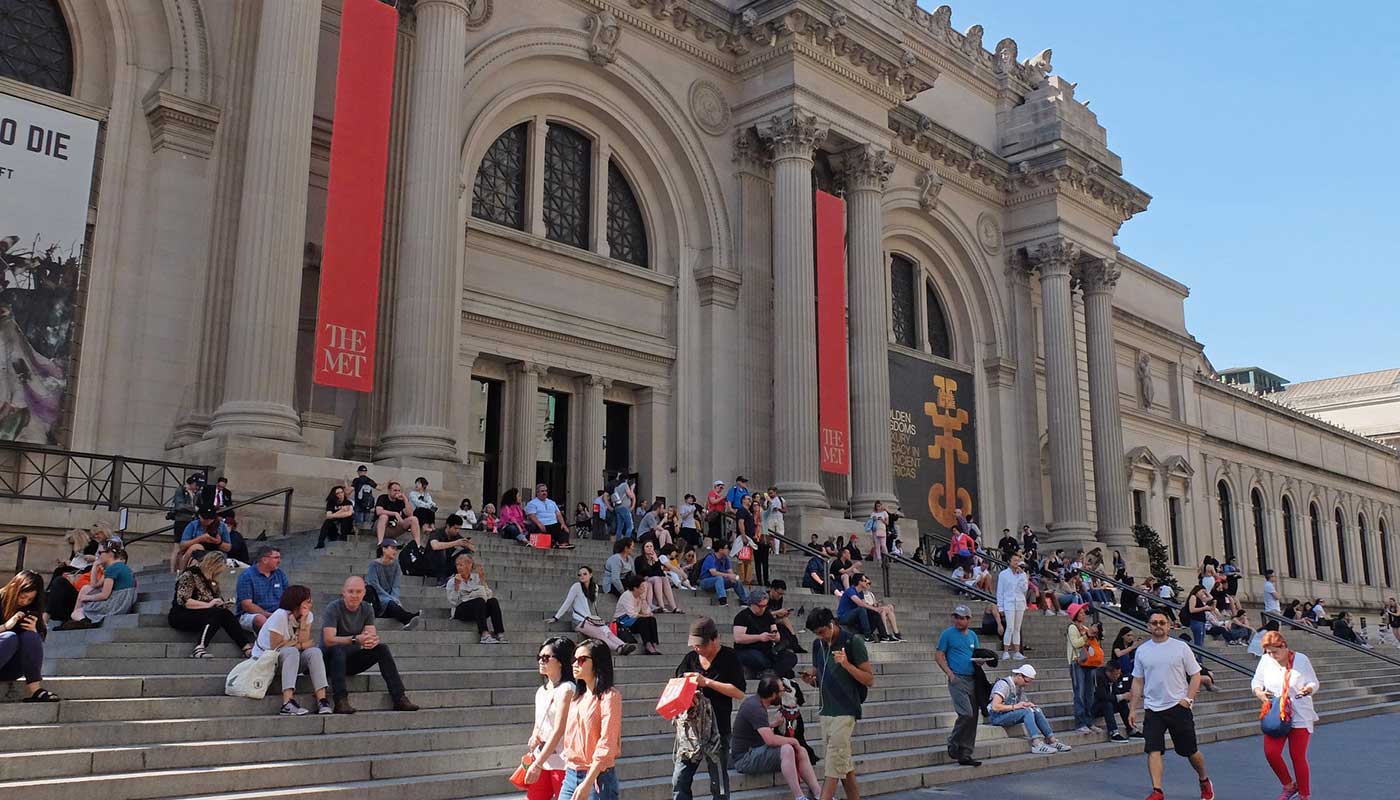 The Natural History Museum New York (officially called the American Museum of Natural History) is a great museum to visit with kids. When you first enter the museum you are greeted by a dinosaur and in the Hall of Saurischian Dinosaurs (or as I like to call it the “dino room”), you can learn about the great Tyrannosaurus rex. I would also make sure you see the big blue whale which is a great feature of the Natural History Museum. It also is home to the New York Space Museum: the Rose Center for Earth and Space, featuring the Hayden Planetarium. 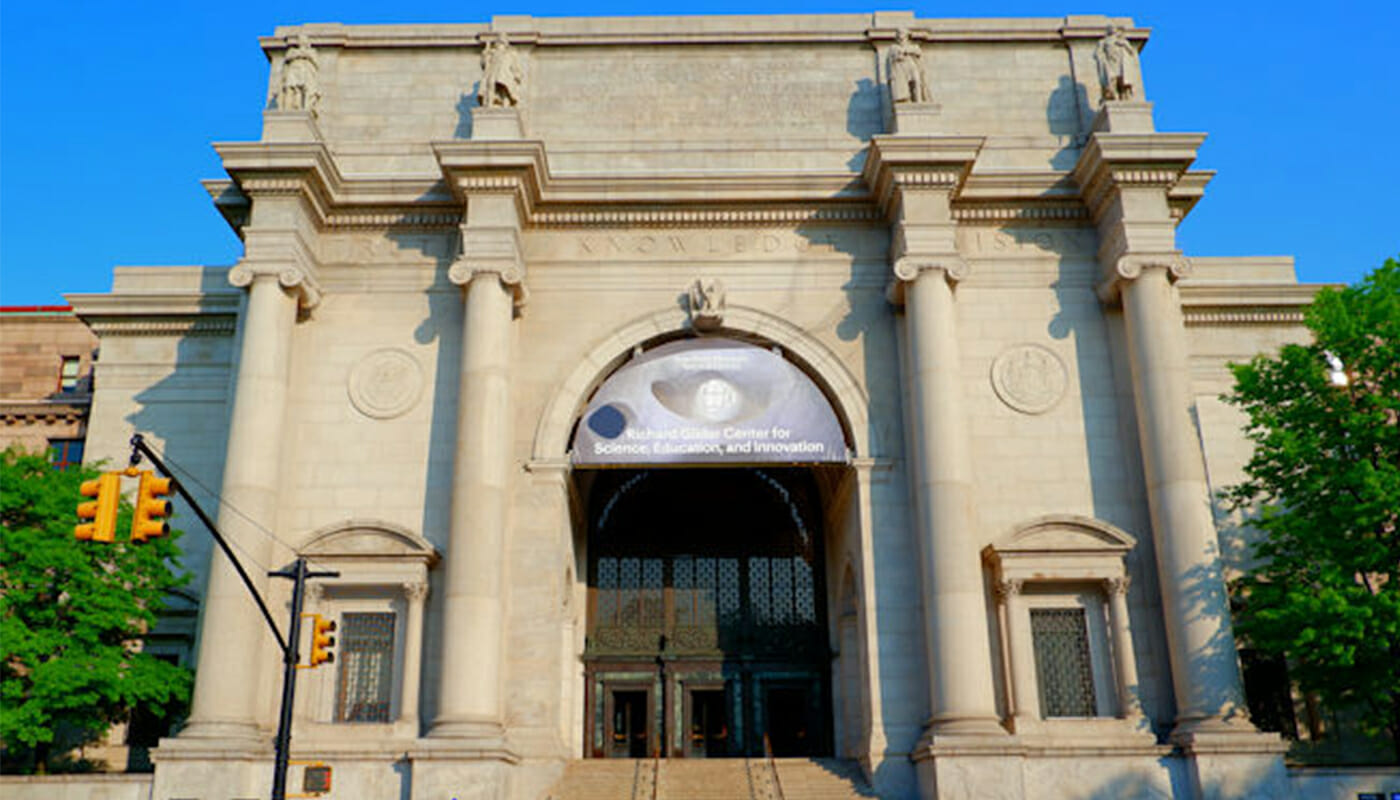 The Guggenheim Museum New York (officially called Solomon R. Guggenheim Museum) is probably one of the most iconic museums of New York. The museum is most famous for its futuristic white building that you can’t miss on 5th Avenue. It resembles a nautilus shell and is very photogenic, so if you don’t want to go in you can snap a photo and have coffee nearby. The Guggenheim Museum hosts a lot of thought-provoking and edgy exhibitions and because of the design, it’s an easy museum to navigate through. 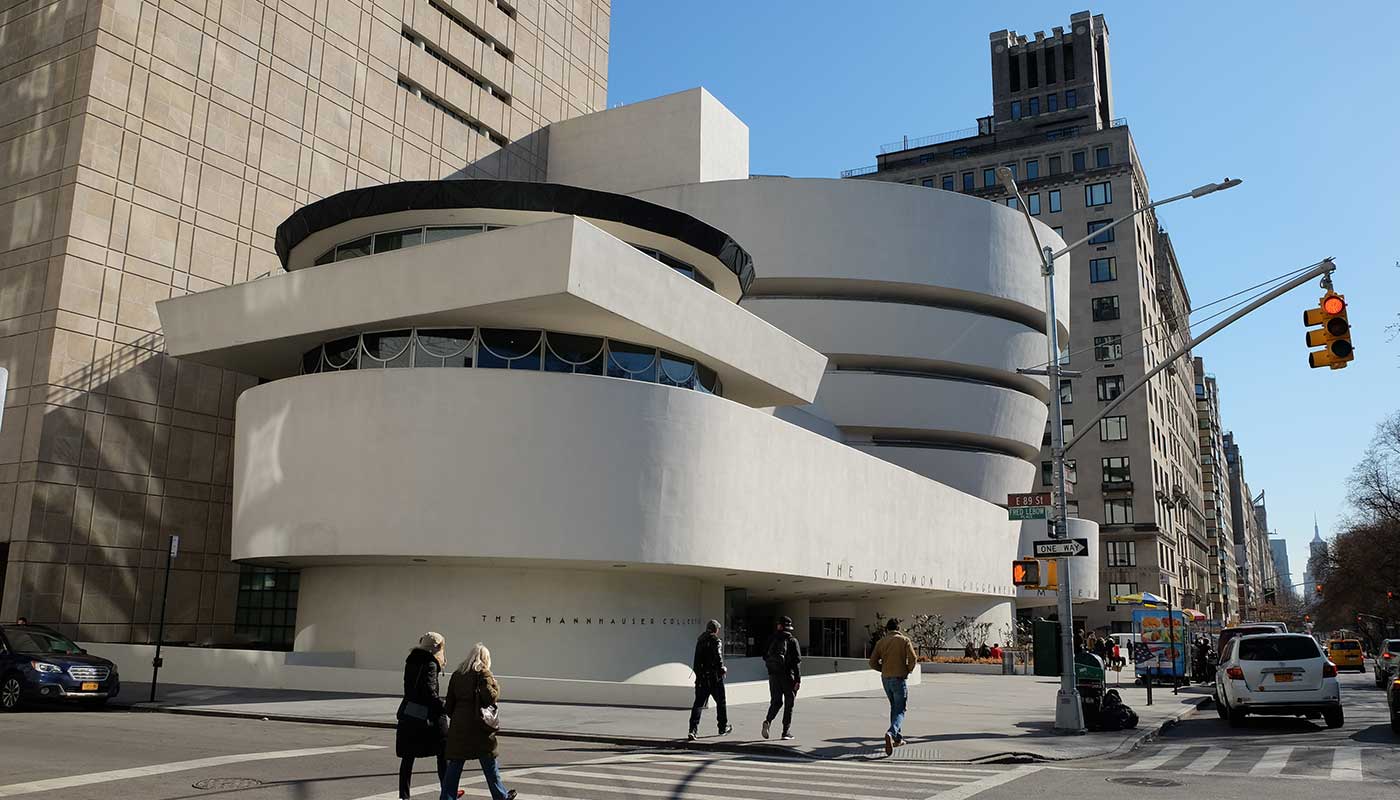 The MoMA is one of the last art museums in NYC on my list. It’s officially called the Museum of Modern Art. MoMA is the place to go if you would like to see work by Andy Warhol, Jackson Pollock or Frida Kahlo. The museum has a collection of modern and contemporary art. There is also a smaller museum called MoMA PS1 in Long Island City which presents more thought-proving and experimental works of art. MoMA is great to combine with a visit to Top of the Rock as it’s about 10 minutes away. 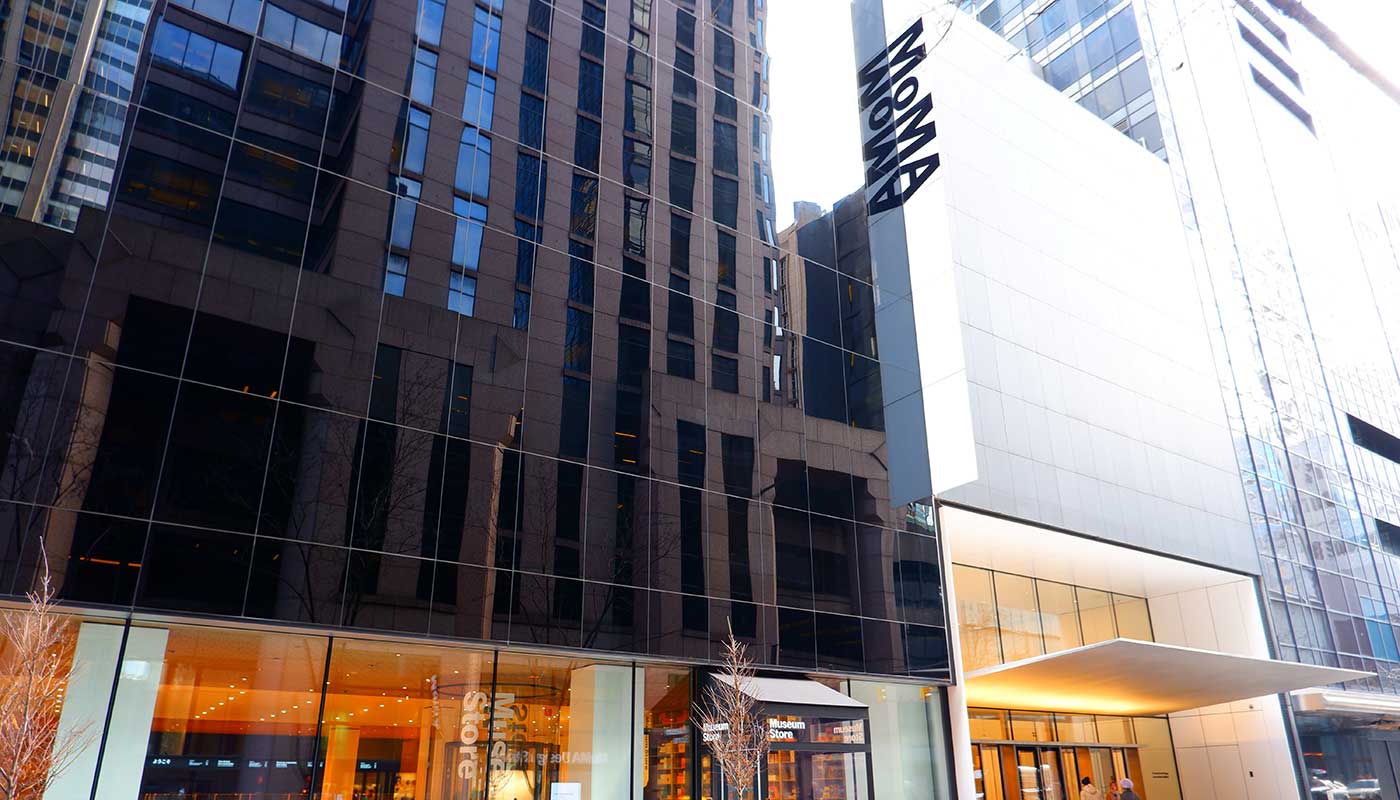 The Brooklyn Museum in New York is one of the largest and oldest museums in the United States. The museum is known for its diverse collection of one and a half million works of art. Here you can find works of art from all kinds of ages and places from around the world. Works by Picasso, Van Gogh, and Judy Chicago, among others, are exhibited in the museum. The diversity of the Brooklyn Museum offers something for everyone, which I really like. The museum is easy to reach because the metro station is in front of the door.

Eric’s Tip: The Tenement Museum New York is located in the Lower East Side and it’s on my list as a bonus museum. I think it’s a great museum to visit if you are looking to learn more about how immigrants to the city lived in the 19th and 20th centuries.

If you plan on visiting a lot of museums and are looking for something like a museum pass for New York, then I recommend getting a discount pass. There are a lot of different options like the Go New York Explorer Pass or the New York Pass that have entrance included to the best museums in New York. Tickets to most museums are around CAD$33 so it’s worth looking into which option is best for you. Some museums offer an option to ‘pay as you wish’ but I personally think that that’s best saved for less fortunate local people. There are also days when entrance is free to a few NYC museums but I avoid these days: they will be very crowded.

Are you just looking for fun museums in NYC? If you are travelling with children or teenagers then I highly recommend the Spyscape Museum. If you want to work undercover as agent 007 or Jason Bourne for a few hours then this is the place to visit. Is it raining in New York? Then head to Madame Tussauds to meet some celebrities in wax.

There are a lot more museums in New York, here are a few others that are worth visiting: