By US Open Tennis tickets before you travel, you cannot buy them at the venue itself. US Open Tennis is one of the four Grand Slam tournaments and takes place each year in New York. This two-week tournament is the biggest sporting event in the US with the most spectators. The US Open Tennis is held during the last week of August and the first week of September. This event is a stage for the biggest names in tennis and also where the most dramatic and challenging matches take place. It is also the last Grand Slam of the year.

You can buy tickets to a match or a session at US Open Tennis by looking for the date when you’d like to visit a match or view the table below. The tickets can be paid by credit card or PayPal and are sent to you by email. The tickets are mobile e-tickets that you can show on your phone to enter the stadium. You don’t need to print these mobile tickets. Your tickets are 100% guaranteed authentic and delivered on time.

Which US Open Tennis Session to Attend?

Since the tournament is two consecutive weeks long, you should consider which days you want to attend. Tickets for the beginning rounds of the US Open Tennis are cheaper than at the end of the tournament (the Championships). Day tennis matches cost more because there are more tennis matches to watch: Day sessions last from 11:00 until the matches are completed (usually in the evening). The evening sessions begin at 19:00 and only last a few matches.

Finally, there are three types of tickets: Arthur Ashe, Louis Armstrong, and General Admission (Grounds Pass). If you buy a ticket for the Arthur Ashe Stadium, you get a designated seat at the centre court. This is where you will find the top matches in tennis. So if you want to see the top tennis stars and the celebrities that watch the court-side, then you must buy tickets for Arthur Ashe. Additionally, an Ashe Stadium ticket will give you access to other tennis courts at the US Open, including the Louis Armstrong, the Grandstand, and the eighteen outdoor courts.

In addition to the Arthur Ashe Stadium, there is another main stadium, Louis Armstrong, but this is a smaller stadium where secondary matches are played. You can buy a ticket for an assigned seat court-side. Court-side at Armstrong have much better seats than you can score at Ashe. However, an Armstrong ticket will not give you entry to the Arthur Ashe Stadium. An Armstrong ticket will provide you with an assigned seat in Armstrong, access to the Grandstand (the third and smallest stadium of the show courts), and the eighteen outside courts.

If you decide not to spend the money on the more expensive tickets for Arthur Ashe or Louis Armstrong, then you can purchase a General Admission pass. This is only available for sale for day sessions. With this ticket, you can visit the Armstrong Stadium (top rows only), Grandstand, and all eighteen outside courts. In addition, there is a jumbo TV screen on the grounds where you can follow the matches played in the Arthur Ashe Stadium live. Since most of the tennis matches in Ashe are played by the American players or the top tennis players, the chances are great that you will easily be able to watch Andy Murray, Novak Djokovic, or Rafael Nadal on one of the outside courts. 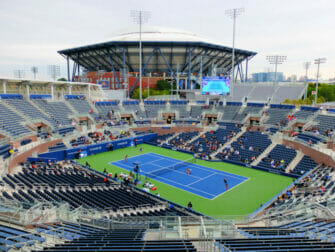 How to get to the Arena

Take subway line 7 that leaves Times Square and Grand Central Station to the stop Mets Stadium – Willets Point. When you get out it will be clearly marked how to walk to the stadium. You can use the MetroCard which means that the trip will only cost you $2.75.

How to get back to New York?

The best way to get back to Manhattan is the 7 subway line. Even at night, the subway is safe because you will not be the only tennis fan heading ‘home’. There are also taxis available but that will costs you up to US$60.

Eating During the US Open Matches

If you want something to eat or drink, there is plenty to choose from all day — from morning until night! There is something for everyone: sandwiches, ice cream, hamburgers, pizza, coffee, cocktails, beer, wine, and much more. In addition to the food court and food stands located throughout the grounds, there are several restaurants. There is a Brazilian restaurant called Mojitos and they have the best terrace for people watching as the fans and even players walk by. However, it’s not cheap. The food and drinks there are pricey. A simple sandwich and non-alcoholic drink can cost you about US$20.

What can you take with you to the Stadium?

When going to the US Open Tennis, leave your large backpacks, laptops, large bags, video recorders, and cigarettes in your hotel room. You cannot smoke anywhere on the grounds at the US Open. Cameras are permitted, however, food and drinks from outside are not allowed. Before entering the US Open, you will be checked by security.

Eric’s tip: If you decide to buy a General Admissions pass (Grounds pass), then any one of the days during the first week of the tournament is best to attend. This is because, even during the early rounds, the majority of the top matches in singles can be viewed on the outside courts. However, during the second week, the singles matches will mainly be played on one of the main courts while the outside courts are showcasing doubles, juniors, and wheelchair matches.

How much is a ticket to US Open Tennis?

That depends on what match you want to watch. US Open Tennis tickets start at: …

Can I buy tickets at US Open?

No you need to buy tickets beforehand. Read on to learn about the different matches and stadiums like the Arthur Ashe Stadium and Louis Armstrong Stadium