Visiting an NFL American Football game in New York is an all-American experience. The New York Giants and the New York Jets play from September until January at the MetLife Stadium in New Jersey. I always advise you to make sure you are on time to visit a game as you can experience ‘tailgating’ – barbecuing in the parking lot! Usually, American Football games are played on Sundays, but check out the complete NFL schedule below for exact dates.

There are two American Football teams in New York:

The MetLife Stadium seats 82,500 people. The Stadium also hosts other events such as concerts and international FIFA football (soccer). 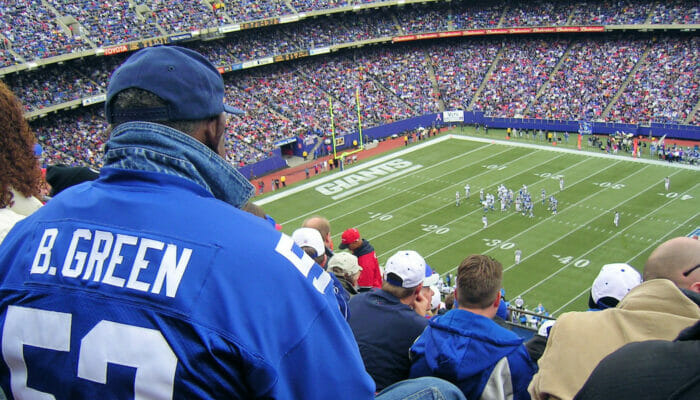 The goal of an American football game is to score more points than the opposing team. Points are scored by carrying the ball from the starting point to the end zone (a touch down) or kicking the ball between the poles (a field goal). The field is 120 yards long and 53.3 yards wide and is divided into two sets of 10-yard markers.

Each team has four plays called “downs”. During each down the team (offence) must move the ball to the end zone of the opposing team (defence). The team must move by ten yards at the end of the four downs to continue playing. If they do not, the opposing team gets the ball. A touchdown is when the football reaches the correct end zone. The defence team tries to stop the offence team by tackling them – when a knee or elbow touches the ground the play ends.

The game is divided into four quarters, each lasting for 15 minutes. There is a break between the second and third periods which is called “halftime”. A typical NFL game will last around 3 hours.

At the end of each season, the two remaining rival teams compete against each other in a championship called the Super Bowl. It’s played on the first Sunday of February. The New York Giants are the better team having won four Super Bowls while the New York Jets have only won once. The New England Patriots and the Pittsburgh Steelers each have won more than five Super Bowls. The New England Patriots have played more than ten Super Bowl games and are one of the most successful teams.

In 2014 New Jersey was the first ‘cold-weather state’ to host the Super Bowl in the outdoor MetLife Stadium. Usually, the Super Bowl is played in a warmer state such as Florida. New Jersey and New York are prone to have blizzards in February.

Halftime during the Super Bowl is arguably one of the most popular parts of the game. Not only are the performances during the break incredible shows but the Super Bowl commercials cost companies millions for a 30-second slot. The biggest pop stars perform during halftime such as Michael Jackson, Diana Ross, Beyonce and Lady Gaga. Discussions of the performances as well as the commercials have become part of the event, even internationally.

How many NFL football teams are in New York?

How much are NFL tickets in New York?

It depends on which team you want to visit. You can read more about NFL tickets in New York here.

Do the Jets and Giants play in the same stadium?

Yes, the Jets and the Giants both play at the MetLife Stadium in New Jersey.