Greenwich Village in New York is located in Manhattan. The neighbourhood is fondly called ‘The Village’. The area’s intimate, European vibe, with its relatively low buildings, makes it a perfect setting for a Sunday afternoon stroll. There are lots of courtyards and gardens here, and due to the lack of high buildings, you’ll catch more sun than anywhere else in New York City.

When it comes to Greenwich Village, there is no such thing as ‘boring’. This part of the city has always been an important sanctuary for counterculture in the United States. In the 30s and 40s, lots of artists and folk singers established themselves here. In the 50s, it was known for drug experiments and in the 60s it attracted loads of musicians. They used to have a large amount of influence on one another, which resulted in new musical genres and artists like Bob Dylan and Neil Diamond. Dylan even mentions The Village in some of his songs. Within this ‘free’ environment, a vivid gay scene quickly arose. In fact, the world’s first Gay Pride took place here, back in 1970.

Expect to bump into quite a few familiar buildings in Greenwich Village. Remember Sex and the City? The show’s main character, Carrie Bradshaw, supposedly lived at 66 Perry Street. Are you more of a Friends fan? It may be disappointing reading that Central Perk, the hangout of the six most famous friends in the world, never truly existed. But The Little Owl, situated at the bottom of the ‘Friends’ building where the six used to ‘live’ may offer some comfort, and with a mouthwatering menu, it is a good alternative. Book the New York film and television tour if you’re interested in seeing more locations from the screen in real life. 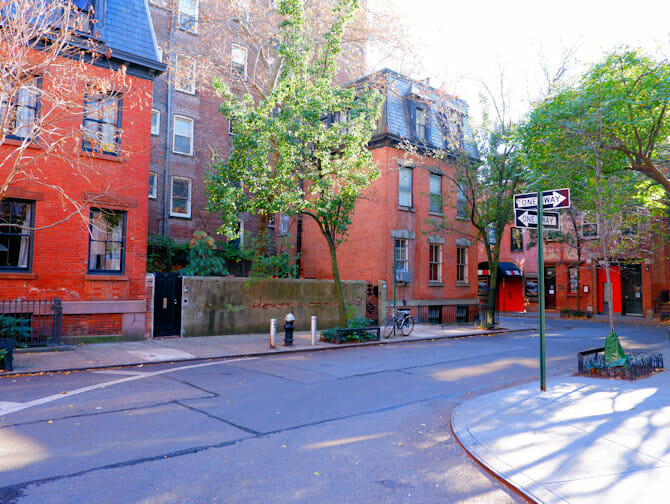 Shopping and dining in Greenwich Village

Although Greenwich Village has its share of chain stores, the charm of this area lies with the local entrepreneurs and their smaller, unique shops and restaurants. On 260 Bleecker Street, you’ll find Faicco’s Pork Store, full of delicious Italian delicacies. Pick your favourites and then head to Pasticceria Rocco for a cheap coffee and the best cannoli ever! Enjoy it all together on a picnic by the water at Hudson River Park (about a 10-15 min walk). You’ll also find the two favourites from my top 5 pizza restaurants in Greenwich Village. My number 1, John’s Pizza, is on Bleecker Street (made famous by that Simon & Garfunkel song). Are you a fan of both pizza and Spiderman? Then be sure to visit and grab a slice at Joe’s Pizza. This place, on Carmine Street, was featured in Spiderman 2.

My favorite place to have breakfast in New York is in Greenwich Village as well. Buvette Gastrothèque offers dishes with a French twist throughout the day. I regularly order a small breakfast from this cosy bistro or go there for a Sunday brunch. 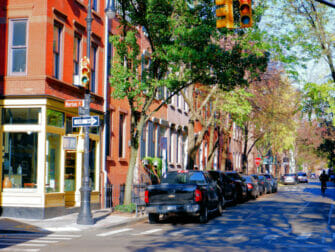 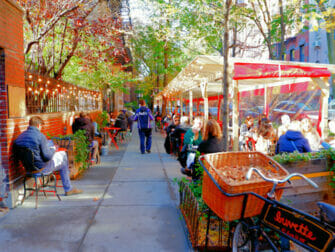 There are not that many hotels in Greenwich Village. Chains cannot be found here, but if you would like to stay in this district, there are some authentic hotels in different price ranges. Walker Hotel Greenwich Village is a nice hotel with good facilities and even rooms with balconies. Other options include the classic The Jane Hotel and Washington Square Hotel.

There are a number of tours you can take to see Greenwich Village. Taking a tour is a great way to get to know (part of) the city and hear stories and experiences from a local. You can explore Greenwich Village by taking one of these tours: