Biking in New York has increasingly become a part of any holiday. New York, and mainly Manhattan, offers lots of possibilities for cycling. Riding a bike along the two rivers or through Central Park is an excellent way of sightseeing and also a fun and relaxing activity. In the recent years the supply of bike rental companies has increased which has lead to a drop in the prices for renting a bike in New York. If you reserve your bike in advance, you’ll only pay a couple of pounds an hour. Popular routes cross the Brooklyn Bridge, Brooklyn Esplanade, go along the Hudson River, the east side of Manhattan or through Central Park.

Central Park is by far the best place to bike in New York. There are hardly any cars and the roads have special bicycle lanes. This makes it a safe environment and is a great but relaxing way to quickly move around. Ideal if you want to see various parts of the park or if you want to have a sporty afternoon. You can also bike on the majority of the smaller paths, but keep your eyes open for signs (there are several squares and pedestrian areas where you’re not allowed to ride a bike). Also look out for other cyclists and horse carriages as they use the same lanes.

Another nice route in New York is the one through Lower Manhattan and Brooklyn. This route also crosses the Brooklyn Bridge. You can rent your bike in Lower Manhattan and start cycling right away. If you’re looking to get some real exercise after enjoying all that New York pizza, then you can take a route around Manhattan which goes along the Hudson River and the East River. This is an extensive bike tour that will take you about four hours.

There are bicycle lanes all over New York. You’ll quickly recognise the green bicycle lanes on the avenues. The bike paths on the streets are marked with lines and signage (images of bikes).  Although New York has more than one thousand miles of bike lanes, biking through Manhattan can be challenging. New Yorkers tend to use the bicycle lanes to park their car and you’ll often have to navigate between yellow cabs and tailboards. Do you want to conquer this concrete jungle? Be careful and consider wearing a helmet.

Is it safe to bike around New York? Cycling in Central Park is definitely safe as long as you stay on the bicycle lanes and follow the rules. You’ll find the largest number of bike paths in New York in Brooklyn. The route that goes through Brooklyn and over the Brooklyn Bridge is also a safe option. Be aware of pedestrians on the Brooklyn Bridge who might walk on the bicycle lane. Crossing Manhattan by bike might be less safe. I often bike through Manhattan and there’s a large number of bicycle lanes, but you should realise that New Yorkers aren’t used to cyclists. They don’t pay attention to cyclists and will suddenly make a turn without looking over their shoulder or open a taxi door at the exact moment you pass by. And from my own experience, I know that the door of a yellow cab isn’t that flexible. If you still want to explore Manhattan by bike, if you’re travelling with young children or if you’re not a very experienced cyclist, taking one of the guided bike tours in New York might be a better option for you.

Children under 14 years old must wear a helmet whereas adults aren’t obligated to wear one. Cyclists in New York are required to stop for pedestrians. Cycling on the sidewalk isn’t allowed and cyclists should observe and obey traffic lights. Use your hand to signal your direction and make sure you stay on the bicycle lanes. Not only is this the safest option, there’s also police surveillance. If you want to park your bike and go sightseeing, you can use one of the many sidewalk bicycle parking racks in Manhattan or the other boroughs. Making use of these so-called CityRacks is free of charge.

I don’t recommend using “Citi Bikes” in New York, a shared bike system that you can find in all larger cities. The system is not convenient as you have to switch/change bikes every 30 minutes. If you don’t bring back the bike within 30 minutes, they’ll charge up to $18 per hour. On top of this I’ve heard too many stories where customers had wrong (very large) amounts deducted from their credit cards. Renting a bike online in advance is a much better option. 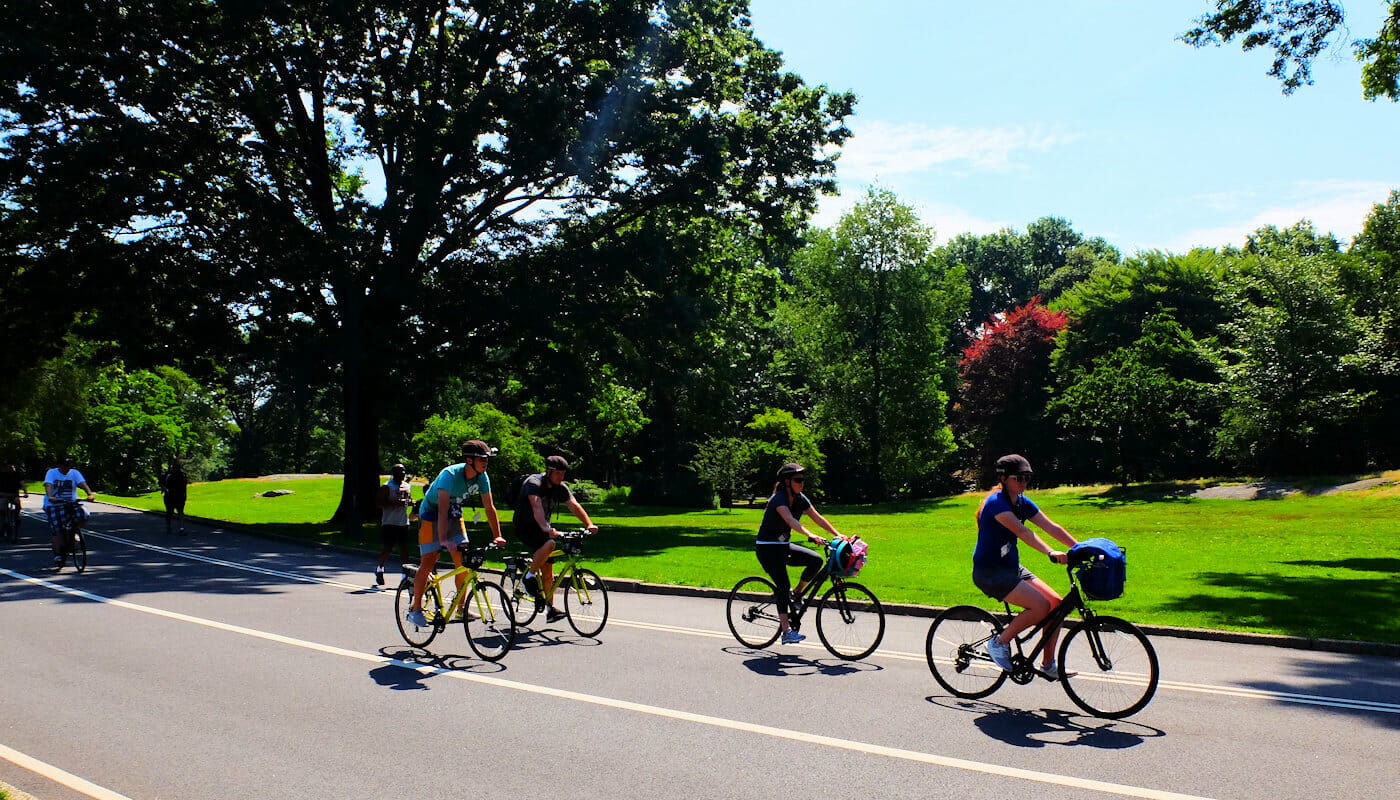