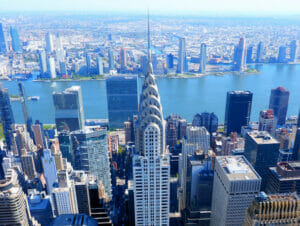 The Chrysler Building in New York is an iconic silver-topped skyscraper in Manhattan. The 77-storey building is 319 meters high. It was built between 1928 and 1930 as the headquarters of Walter Chrysler’s auto group. Therefore, the building owes its name to him. The Chrysler Building in New York (sometimes misspelled as Crysler New York) was once the tallest building in the world. However, it was soon thrown off the throne in this ranking when the Empire State Building opened its doors in 1931.

The Chrysler Building is located near Grand Central Terminal, on the east side of Manhattan. This makes it a defining part of the skyline. It’s used as an office building by various companies. It’s built-in a graceful Art Deco style, with a recognizable spire consisting of silver-coloured arches. On the tower, there are ornaments that are said to be inspired by cars, a reference to the first property owner Walter Chrysler. The building has been used several times for films and animations. For example, it is set in Spider-Man and Men in Black 3.

In the 1930s, an iconic club was located in the Chrysler Building: the Cloud Club. This speakeasy was located on the 66th, 67th and 68th floors of the skyscraper. It attracted many influential business people, including publisher Condé Nast and Walter Chrysler himself, among its regular clientele. The Cloud Club closed in 1979.

Eric’s Tip: The Chrysler Building is one of the most famous buildings in New York. The iconic top is especially famous, at street level far fewer people actually recognize it. From 42nd Street at Grand Central, you have a beautiful view of the building. One of the newest additions is skyscraper One Vanderbilt, which is home to Summit Observation Deck. From here, you have a beautiful side view of the Chrysler Building which is relatively close.

Many people wonder if they can go up the Chrysler Building. The tower is not open to the public yet. You can only take a quick look inside the impressive lobby if you’re lucky. However, there are plans for a Chrysler Building Observation Deck. This viewpoint will be on the 61st floor of the building. It will provide great views of Manhattan. Finally, there will be an opportunity to visit the Chrysler Building! 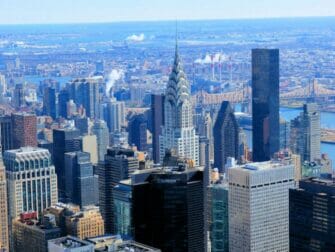 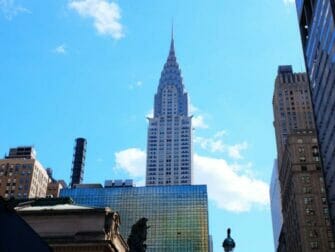