Finding your way Around New York 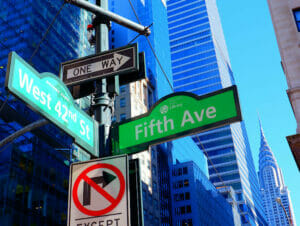 Finding your way around New York can be difficult, at first. But once you understand the ‘grid system’ it’s a lot easier. Manhattan is in fact famous for its grid system. In theory it is very simple. All the streets run from east to west. All the avenues run from north to south. Manhattan is divided into three main sections: Downtown, Midtown and Uptown. Downtown starts south of Union Square. Midtown is north of Union Square up to 59th Street. Uptown is everything north of the bottom of Central Park.

Eric’s Tip: Download my free app, Eric’s New York, so you can easily find your way around New York. In the app you can find a map of the city which includes subway lines, attractions, public toilets and free wifi hotspots. The app can be used offline and has built-in GPS, so you can always see where you are.