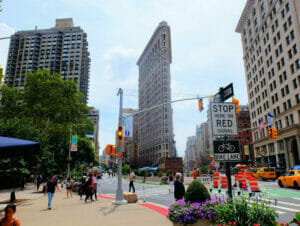 Everything about the Flatiron NY

When you think of New York, you’re sure to imagine the skyline, the Statue of Liberty, the Brooklyn Bridge and naturally the Flatiron Building! The impressive building is a real eye-catcher and a great photo opportunity. You’ve probably asked yourself why the building is called the Flatiron Building. “Flat Iron” refers to an iron in English so the term iron building refers to the special shape of the structure.

The floor plan of the Flatiron Building resembles a triangle that tapers to a point. This means that the parallel base sides of the building are a lot longer than the two short ends. If you take a closer look at the building, especially from above, you immediately know what’s meant by the description. While the Flatiron Building isn’t the only ‘iron building’ in the world, it’s arguably the most famous!

Where is the Flatiron Building?

Some people say that you can’t miss the Flatiron Building because of its eye-catching shape. However, from a distance, due to its color and shape it does blur in with the surrounding buildings. If you can’t find the Flatiron right away, don’t worry! Just use my free Eric’s New York app to get to the famous Building.

If you need the exact address of the Flatiron Building, this landmark is located at 175 Fifth Avenue (between East 23rd and 22nd Streets) in the Flatiron District. Yes, the neighborhood is named after the famous skyscraper! The neighborhood was named in the 1980s to attract homeowners and renters. Previously, due to the many toy factories located there, it was called the “Toy District”.

What’s in the Flatiron Building?

How tall is the Flatiron Building? 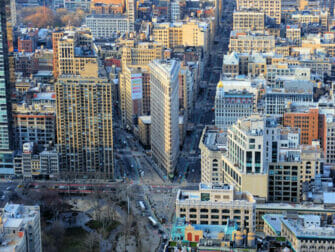 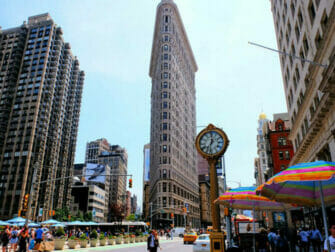 New York Flatiron in film and on television

The New York Iron House, as it is often affectionately known, has become a real symbol of New York over the years. It’s no surprise that the Flatiron Building can be seen regularly in films and TV series. When it’s not accidentally destroyed by the US Army (such as in the 1998 film “Godzilla”), it’s often used as a backdrop in scene changes for example in “Friends”. The building also gained fame as the location of the Daily Bugle newspaper in the “Spider-Man” trilogy.

Would you like to learn more about the famous filming locations in New York? Then take the New York TV and Movie Sites Tour to see the most iconic locations with your own eyes.

The history of the Flatiron Building begins with architect Daniel Burnham, who was commissioned with the design and construction. Burnham was one of the most famous architects in America during his lifetime. His bold design of the Flatiron NY initially earned him a lot of ridicule from the New York newspapers. The New York Tribune described his work as a “measly piece of cake” and “New York’s greatest lifeless troublemaker”.

Fortunately, the people immediately embraced the Fuller Building (that is the name actually intended) and renamed it the Flatiron Building without further ado. The construction lasted only one year due to the new steel frame construction. This certainly contributed to the building’s growing fame.

The Flatiron has 22 floors, which were designed as office floors from the start. In 1959 the publishing house St. Martin’s Press moved in, which gradually rented additional office floors and from 2004 was even the sole tenant of the building. Even after the latest major renovation, the Flatiron New York will continue to serve as an office building.

In 1989 the New York Flatiron was named a National Historic Landmark, a title that only increased its popularity. The building is currently valued at $190 million so keep in mind when you’re taking a picture; you have a very expensive piece of iron in front of your lens. 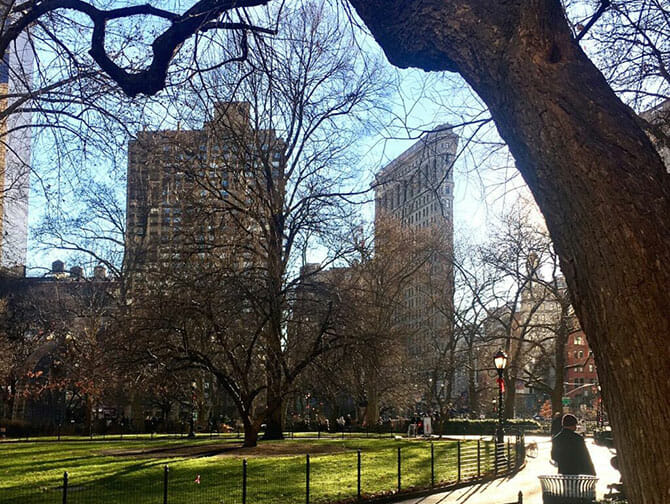 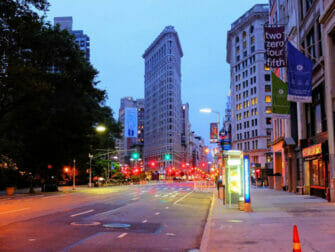