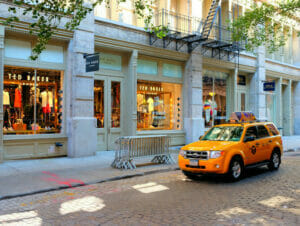 Shopping in SoHo should definitely be part of your New York trip. SoHo is the area between Houston Street, Canal Street, Sixth Avenue and Lafayette Street which also gives it its name: South of Houston. Every street corner is bursting with shops, a mix of high street and boutique. In addition, your experience is enhanced by the beautiful buildings and cobblestone streets. It’s easy to get a bit lost in SoHo, but don’t worry. You’ll probably just discover a new fantastic store! It can get very busy at weekends, especially in the afternoon. So, if you can, plan your shopping on a weekday. Most hop on hop off tours have a SoHo stop.

If you’re not sure where to start, take the subway to Prince Street or, if on foot, head to the crossing of Prince Street and Broadway. Pretty much most of the major brands are found along Broadway. If you are looking for more boutique stores, then head to Prince, Broome and Spring Streets. Also, for art lovers, West Broadway has the most galleries.

There is a Bloomingdale’s on Broadway, which is a bit smaller than the Midtown branch. It also has free wifi and free toilets (look for signs that say lounge/restroom) so is a good pitstop during your shopping spree. There’s also a big Nike store, with five floors full of sneakers and sportswear. Broadway is also home to stores such as Banana Republic, American Eagle Outfitters, H&M and UNIQLO. In Addition, Forever 21 and Prada are located here, but it’s not only clothing. Head to Best Buy for electronics or Crate and Barrel for homeware. 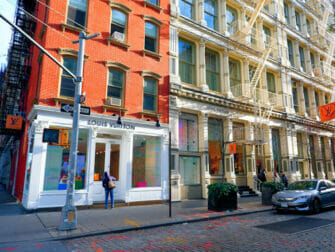 Leave Broadway and wander the cobblestone streets, away from the larger crowds. Here, you’ll find more luxury brands like Louis Vuitton and Stella McCartney. On Prince Street, there is also a big Apple store. In one of its side streets, you’ll find Canada Goose, a great place to buy a new winter coat. West Broadway is also worth a stroll, it has a few nice art galleries and UK brand Riess is there plus a big Gucci store that almost looks like a museum. Greene Street is also a nice option and usually a bit more peaceful. Here you’ll find the American outdoor brand Patagonia and a branch of the Italian Stone Island. 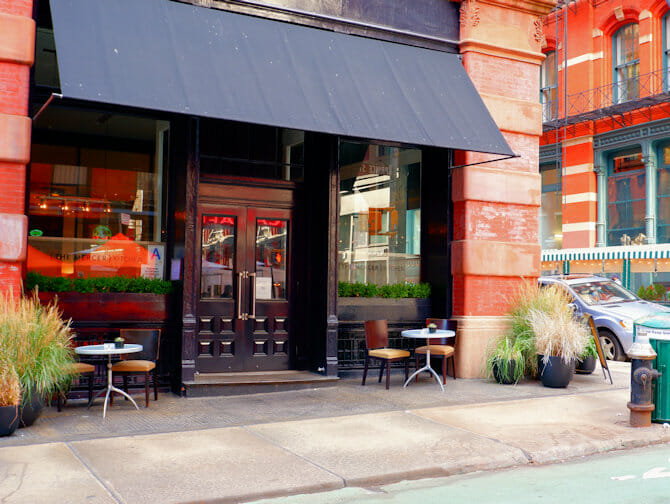