The Best Sushi in New York 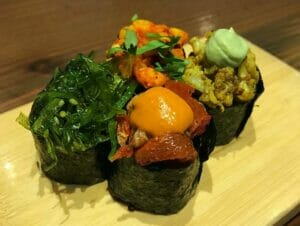 Where can you find the best sushi in New York? New York has a real sushi culture and there might be even more sushi places than Starbucks coffee shops – and that’s saying something! You can find a sushi place at almost every single corner. Manhattan in particular is a sushi mecca. Many supermarkets even have their own sushi bar, serving freshly prepared rice bites all day.

I’m not sure if Japanese people like the New York sushi just as much, but if you – like me – love sushi with a twist, you’ve come to the right city. New Yorkers are famous for experimenting with various ingredients, as such the special rolls are popular. This oddity doesn’t have any influence on the food’s quality: the more expensive places all work with the very best fish they can find.

Due to the use of fresh fish, sushi doesn’t come cheap. This top 6 has some great value for money options though. Still a bit pricey? Prices on the lunchtime menu are often cheaper than the ones on the dinner menu!

Abace Sushi might not serve New York’s best sushi, but it’s my personal favourite and I’ll tell you why. First of all it has plenty of options, secondly it’s far from being touristy, thirdly it has great prices and fourthly the special rolls are all worth a try. It’s only a small restaurant, seating sixteen in a simple setting. Try to grab a seat and squeeze in with the locals for a nice lunch or dinner. My tip: try the Volcano Roll and the Colourful Dragon Roll.

Blue Ribbon is the perfect place to bring a date. This upscale SoHo restaurant is very charming. Actually, it has lots of everything: lots of charm, it costs lots of money and lots of people go there. This is not only due to the fact that Blue Ribbon wins many awards each year, but also the fact that it’s such a small place. Unfortunately, you can’t reserve a table. Now I can’t do anything about the fact that it’s very expensive, but you won’t find this quality anywhere else. Not only is the food exotic, exclusive and of the very best quality, the sake menu is equally impressive. Make sure not to walk past Blue Ribbon: go down the stairs to get there. You know you’re at the right place when you see a whole bunch of hungry-looking people waiting in line… It may require some sacrifices, but to see (and eat at!) this place they’re definitely worth it!

At Blue Fin the sushi is good, the view even better. If you manage to get one of the (rare) window seats overlooking Times Square that is. A brilliant place to eat sushi! No appetite? This is the kind of place you can just drink a beer or a glass of wine at the bar and order some sushi to go with it. A great choice if you have some spare time before visiting a Broadway show! 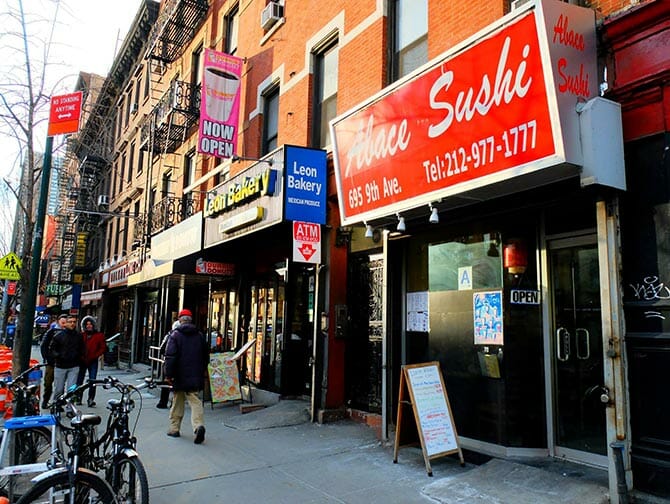 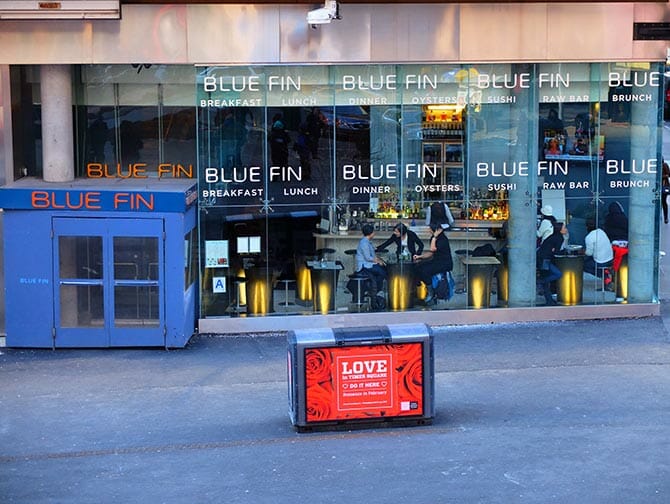 Nobu New York is an upscale sushi restaurant. This ‘super sushi place’ comes highly recommended as the bill will indicate. I personally think it a little less atmospheric than Blue Ribbon, though the price and quality are the same. Actor Robert De Niro is one of the restaurant’s co-founders and chef Nobu Matsuhisa is a Japanese cuisine pioneer. He was trained in Tokyo and lived in South America as well as on other continents. This specific influence is what makes his dishes so special. Dishes indeed, since he serves a whole lot more than sushi. Why not try lobster with wasabi pepper sauce? And his famous cod in miso!

Want to grab sushi on the go? It might surprise you, but Whole Foods also belongs in this top 6. This is one of those supermarkets where they prepare fresh sushi all day long. The in-store sushi bar is called Genji Sushi. You can choose the fresh ready-made sushi, or you can give a special order and wait a few minutes till it’s ready (or do some other groceries in the meantime!). This supermarket sushi is great value for money, they’ve even thought of health freaks (brown rice and quinoa sushi) and it’s at a great location as well. Eat your sushi on Columbus Circle or, even better, in nearby Central Park!

The food at Takahachi in TriBeCa is fast, fresh and good. It’s not cheap, but for New York it’s not expensive either. They offer regular sushi, but also some special rolls that sushi restaurants in New York are known for. They have some unique names as well, like the Godzilla and the Taxi Driver. Takahachi also has a restaurant in the East Village. 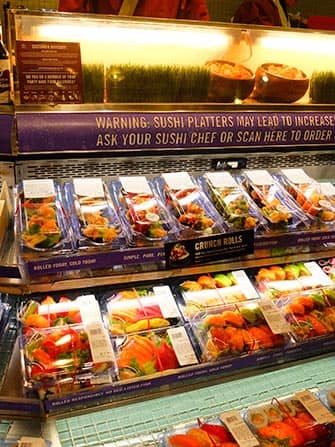 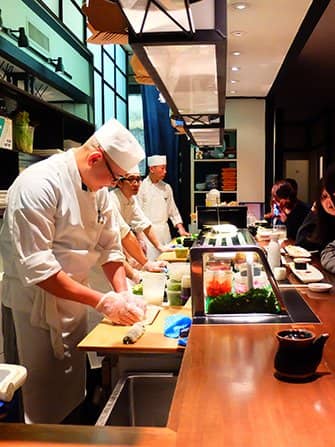