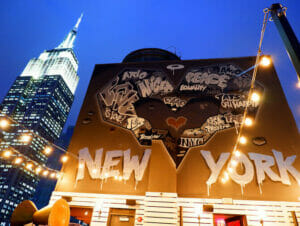 The time difference between London and New York is between one to three hours. New York City is located in the UTC-5 time zone, during summertime it becomes UTC-4. It’s important to know that Canada is divided into six time zones. From the second Sunday in March to the first Sunday in November, most of Canada follows daylight saving time. In this post, you’ll find the Standard Time Zones (for Daylight Saving Time Zones, the time difference will be one hour less).

A lot of people are interested in knowing what the time difference is between Canada and New York when they are planning a trip to New York. The New York time difference is depending also on daylight saving time but there is a way to calculate the time in New York. If you are asking yourself “What time is it in New York?” or “How late is it in New York now?”, you can just check your watch and subtract or add between one to three hours depending on your time zone in Canada. That means if your clock at home in Edmonton, AB shows noon (12:00), then it is currently 2 PM in New York City. Keep in mind that the current time also depends on the summer and wintertime.

When travelling to New York in the spring or autumntime, don’t forget to pay attention to daylight savings time or summer and wintertime as many call it. If you have difficulty remembering how the clock is set, Americans have a saying that helps: “spring forward, fall back”.

Unlike other countries in the world, New York and Canada use the same dates to start and end Day Light Savings. In 2021, the clocks in New York will move forward on the night of Saturday 13th and Sunday 14th March. Daylight Saving Time (DST) in Canada starts on the 14th of March as well. There’s no time difference between New York and Ottawa, Montreal, Toronto, and Quebec. Compared to New York, Nova Scotia is one hour ahead and Newfoundland is one hour and a half. However, Winnipeg is one hour behind, Edmonton and Calgary are two hours and Vancouver is three hours.

If you have difficulty remembering how the clock is set, Americans have a saying that might help: “spring forward, fall back”. Clocks move one hour forward in the spring and one hour back in the fall.

In New York and Canada, the clock is turned back on the same day. In 2021, the clocks will be turned back by one hour on 7th November.