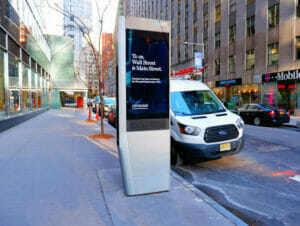 Using Wi-Fi in New York (wireless internet) is very handy if you want to quickly check emails, visit NewYorkCity.ca or share something on Facebook! Luckily, there are many places in New York where free internet is available. It’s possible to surf in parks, hotels and even subway stations. Wi-Fi is available in a lot of (fast food) restaurants, bars and diners. Almost every McDonald’s, Starbucks or Applebee’s has a Wi-Fi network available and there are Wi-Fi spots everywhere in the streets as well.

Wi-Fi in the subway stations in New York

Most subway stations in Manhattan and the biggest ones in the other boroughs offer free Wi-Fi. Times Square, Columbus Circle and Rockefeller Center stations are a few of the many stations with Wi-Fi access. When you select the Wi-Fi network you will see an advertisement. Accept this advertisement if necessary after which you will be connected to the Internet. Note: the network is not available on subway trains. 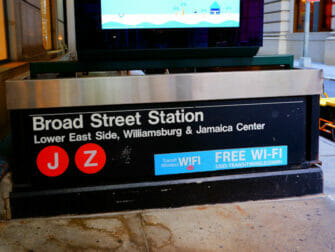 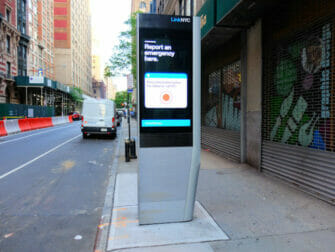 There used to be 12,000 phone booths in New York. Instead of removing all of them, some were converted into Wi-Fi hotspots. This network is called LinkNYC. It makes Wi-Fi available in almost all of Manhattan and the main streets of the other boroughs. You can log in to the free Wi-Fi network from about 30 meters away. Connect with “LinkNYC Free WiFi”. To do so you’ll need to accept the terms and conditions.

Wi-Fi in the parks

In most of the parks of New York, there’s also free Wi-Fi available. In Central Park, High Line Park and Battery Park for example you can access the Wi-Fi without a login or a password. You can also use free Wi-Fi in Bryant Park, Madison Square Park and Union Square Park, among others. The exact duration and other conditions for the Wi-Fi usage vary by park.

If you don’t want to look for free WiFi in New York, an eSIM card data plan is a good option. With an eSIM card, you can easily put a data plan on your phone, without a physical sim card, and for little money. This allows you to always stay connected to the internet during your trip to New York. So you can always find your way, share your holiday photos on Facebook, Twitter, and Instagram, or send me a message if you have a question.

Is there free WiFi in New York?

New York has free Wi-Fi in parks, subway stations and many other places. Find the free Wi-Fi hotspots in my free Eric’s New York app

What is Link NYC WiFi?

LinkNYC is a free Wi-Fi network in New York. Many of the city’s old phone booths have been turned into these free Wi-Fi hotspots.

Do NYC parks have WiFi?